Artist in Residence at Buffalo Thunder is a special series of public artist demonstrations from a talented array of Native American artists. Each weekend the City of Santa Fe, Hilton Buffalo Thunder and the Poeh Cultural Center will feature a new artist to display and sell their works of art. Art will include traditional pottery, jewelry, fiber arts, and illustrations. In addition to the featured demonstrating artists, local artists will accompany the program. Friday nights at 6pm will have special performances by the Pueblo of Pojoaque Youth Hoop Dancers.

Please refer below for Artist and Dates:

The exhibit, which will feature the works of 21 established New Mexico Hispanic and Native American artists, as well the works of youth and emerging artists. Their work celebrates the rich artistic and spiritual traditions as expressed in jewelry, painting, sculpture and photography.

Cara Romero, a photographer, described how the exhibit celebrates the intercultural connections of peoples in the Southwest. “Many of us (Natives from the Southwest) have grandparents that were listed as Mexican citizens. Many of our tribal languages from north and south of the border are the same,” Romero said. “The songs, the art, the dependence on the very same lands and waters.  Our parrot bundles come from there, our shells and the shared culture of Dia de los Muertos reminds us that we were once the same peoples.”

This year marks the 10th Annual occasion for the show. “The reason I started the show was to showcase some local young and upcoming artists mainly to give back and remember the ones we have lost in our families, and to bring back the festival into New Mexico culture.” said Toby Morfin, one of the organizers and artists featured in the exhibit.

The opening reception for the exhibit will be held October 26th, from 5:00pm to 8:00pm at the Poeh Cultural Center in Pojoaque. 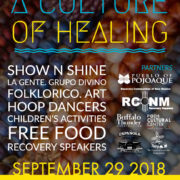 Come Celebrate A Culture of Healing. We’re inviting the community to this FREE family event, where there will be fancy cars, your local bands, a bounce house for the children, along with face painting, a climbing wall. While you enjoy this culture, we’ll have contests, and hopefully you can walk away with a piece of art from your local artists, if not at least you’ll enjoy the dance groups! We also encourage to participate in the workshops given by the Recovery Community of New Mexico 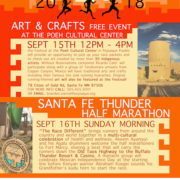 The Festival at the Poeh Cultural Center in Pojoaque Pueblo will provide an opportunity to pick up your race packets and to check out art created by more than 30 indigenous artists. Without Reservations cartoonist Ricardo Cate’ will participate along with a group of Tarahumara artisans from Copper Canyon, Mexico will have traditional arts and crafts including their famous tire sole running huaraches. Original running-themed art will also be featured at the Festival! 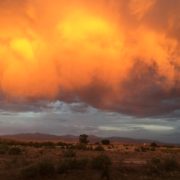 This exhibit features the work of Poeh Cultural Center art students who have been working with Shawn Tafoya from Santa Clara to create embroidered kilts, sashes and other traditional Pueblo dance regalia.

This exhibit features the photos of stunning New Mexico sunsets submitted to the Poeh by our Facebook friends. Our panel of judges will determine the image that best represents the soul of our spectacular New Mexico sunsets. 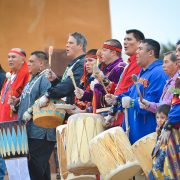 Pueblo of Pojoaque Summer Feast Day begins at
9am with Mass in the Chapel & dances will follow.

Please no photos or videos including cellphones. 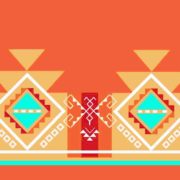 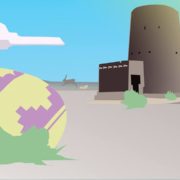 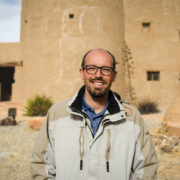 Claver Garcia was born in Santa Fe, New Mexico in 1992 and raised between Ohkay Owingeh and Tesuque Pueblo. His father the late Gordon Garcia and mother Angela Vigil helped support and inspire Garcia to pursue his Artistic career. Claver Garcia is the second oldest of four children and the only male. Art influences include 90s cartoons/animations, traditional/contemporary Native American paintings and designs.  He currently resides in Santa Fe, New Mexico where he is attending the Institute of American Indian Arts.  Working on a BFA in Studio Arts with a minor in creative writing, Garcia focuses on painting, ceramic and sculpting.
https://poehcenter.org/wp-content/uploads/2018/02/POE-FB-event-copy2-e1523741132780.jpg 276 551 Curator1 https://poehcenter.org/wp-content/uploads/2020/06/POEH-LOGO-BLACK-copy.png Curator12018-03-01 17:00:002018-02-22 16:29:48Spring Exhibit 2018