You are here: Home1 / MUSEUM 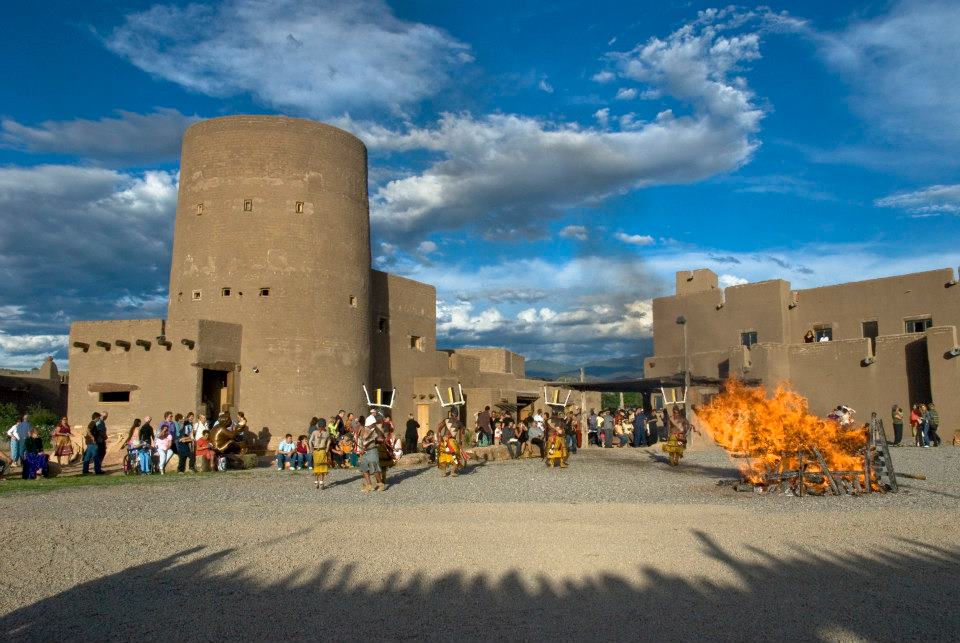 Founded in 1988 by Tribal Council Resolution, the Poeh Museum is a unique hub of Pueblo culture that serves Native and non-Native peoples. The Poeh Museum strives to promote cultural preservation through curation, exhibition, and interaction with all Pueblos. As a critical resource for promoting and preserving Native American Pueblo art and culture, the Poeh Museum is a unique treasure in American history. With a primary focus on the artists of the six Tewa-speaking Pueblos of northern New Mexico, its programs focus on preserving traditional and contemporary Pueblo art and culture. Its rapidly growing collections include current, historical, and archaeological works, which are invaluable resources to artists and researchers from within and outside the Pueblo community.
Like all Tewa Pueblos of northern New Mexico, The Pueblo of Pojoaque (or Po’su wae geh) was systematically stripped of its heritage, culture, and traditions by European contact in the 16th century. The Pueblo of Pojoaque is partly revitalizing their traditional practices through the efforts of the Poeh Center’s mission to teach their Native language, traditional song and dance, and material culture.
The Permanent Collection was unveiled on August 14, 2005. The Pueblo of Pojoaque and the Poeh Cultural Center and Museum are excited to be able to serve the Pueblo and local communities by completing Nah Poeh Meng, a permanent collection in the newly constructed Poeh Cultural Center. The completion of our new permanent exhibition Nah Poeh Meng (On the Continuous Path), will anchor our new museum building. A 1600-square-foot installation, this exhibit portrays Tewa history from within the Tewa worldview — offering both Native and non-Native visitors a chance to experience Tewa stories through art, word, and history.

In addition to the museum’s grant-funded projects and exhibitions, the Poeh Museum is engaged in helping Pueblo communities with cultural preservation.
Oral Histories Documentation Project in 2001 and 2002. The project allowed the Poeh Museum to document stories from Tewa tribal members in northern New Mexico. Tewa traditional belief systems, religion, song, and dance are orally transmitted through generations. Tewa elders in New Mexico believed that significant oral histories would be lost if they were not recorded for future generations. Thirty-eight individuals participated in the project and provided stories about their lives. Most of the interviews and stories were recorded in Tewa (later translated into English), hoping that Tewa children would be encouraged to learn their traditional language. An important issue arose during the project; Tewa’s from New Mexico migrated to the Hopi reservation over 300 ago. The Poeh Museum staff traveled to the Hopi reservation and interviewed five Tewa-Hopis. During the visit, the connection between the Rio Grande Tewa and the Tewa-Hopis became obvious. Tewa Clan Leaders then initiated a project to visit the New Mexico Pueblo and their ancestral sites. The group visited the Pueblos of Pojoaque, San Juan, and Santa Clara. Relationships and friendships were reestablished, providing long-lasting cultural benefits for all of the Tewas.
The Collections Gallery at the Poeh Museum, which opened in August 2002, provides opportunities for study and research by all tribal members and the public. The collection, comprised of 600 pieces, documents upcoming artists from all Native communities and contains some historical pieces. Students from the Poeh Arts Program are encouraged to work with the collection as a part of their curriculum.
The National Endowment for the Arts Technology Program was a significant learning opportunity for everyone. The museum’s archival, photographic, and permanent collections are available online for use in classrooms, cultural institutions, museums, or among the general public for browsing or research. The photographic archive includes documentation of Pueblo Feast Days, dances, architecture, agriculture, and Pojoaque’s economic development. An online curriculum is currently being developed in collaboration with Rena Swentzell from Santa Clara Pueblo. The story and exercise will encourage Native people to look at their worldview from a traditional or Pueblo perspective. It will allow the public to understand how Pueblo people view their lives as Native people and how this affects their artwork or material culture.
The museum’s permanent exhibit, Nah Poeh Meng (“Along the Continuous Path”), was formalized and approved by local tribal members. The permanent exhibition is interpreted by and in the voice of Native people. The exhibit was planned for years to ensure accuracy and participation from Pojoaque and the other local Pueblos in New Mexico. The exhibition contains seven different languages: Tewa, Tiwa, Towa, Keresan, Zuni, Spanish, and English. Having the exhibit interpreted in all of the Native languages of New Mexico enhances the overall visitor experience for all of the tribes in New Mexico and aids in preserving language and culture.