In “Residency” Douglas Miles will show all new work created during his recent stay in San Francisco, California. The deYoung Museum Global Fellow residency allowed him time and space to create new large scale multi-media works. His constant work in the city resulted in creating four new murals, curate a group art show, three short films and designed four new Apache Skateboards. His new work was inspired by the streets of San Francisco as well as informed by the creative historical communities such as the Mission District and the Tenderloin.

As an indigenous visionary, Douglas Miles is one of those rare and important figures who continues to reside one step ahead of the main stream Native American art world. Miles tells his experiences through an array of mediums including graphic design, photography, spray paint, stencil, fashion, found objects, community organization and whatever else he can use to speak truth about his experience.

The imagery of Douglas Miles invites the viewer into an iconic conversation of progression regarding indigenous existence. Miles creates a new set of rules and then breaks them down, never compromising for the status quo, and always inviting a necessary representation to the current understanding of what it means to be Native American. His career is a poem written to all who have come before him and to all who will come after.

Cannupa Hanska Luger is the recipient of the Native Arts & Cultures Foundation National Artist Fellowship Award among other notable acclaims and has participated in artist residencies and lectures throughout the Nation. Luger currently holds a studio practice in New Mexico, maintaining a clear trajectory of gallery and museum exhibitions worldwide.

Cannupa Hanska Luger’s work has been noted as “a modern look at ideas of colonization, adaptability and survival as major components to the development of culture” by Western Art Collector Magazine and The Native Arts and Cultures Foundation noted that “Luger could well rise to be one of those artists whose caliber is unmatched and whose work will be studied by students to come, thus furthering the path for many more contemporary Native artists.” 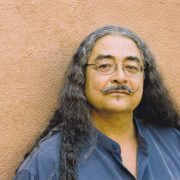 Joseph M. Sánchez is an American artist from Trinidad, Colorado, by way of the White Mountain Apache Reservation and Taos Pueblo. A leader in Indigenous and Chicano arts since the 1970s, Joseph has worked with hundreds of artists creating work, developing exhibitions, and advocating for the rights of minority artists, most importantly with the Professional Native Indian Artists (Native Group of Seven). A spiritual surrealist, Joseph’s work is sensual and dreamlike, provocative and thought-inducing. Still producing work, and exhibiting across the United States and Canada, Joseph M Sánchez is simultaneously a community elder, and an instigator at the front lines of the battle for the creation of art and how we define it as a culture.

Born in Trinidad, Colorado to Pueblo, Spanish, and German parents, Joseph Marcus Sánchez was raised in Whiteriver, Arizona on the White Mountain Apache Reservation. In 1966, he graduated from Alchesay High School in Whiteriver, with the intent to join the priesthood. This was not the right fit, and he returned home to the White Mountains. Sadly, his mother became ill and died unexpectedly. Soon after, in 1968 he joined the United States Marine Corps and was stationed at the El Toro UCMC Base in California, where he trained soldiers drafted for the Vietnam War.

In 1970, He travelled to Canada, where he met Ann Nadine Krajeck, a young photographer. They were married and settled in Richer, Manitoba, eventually purchasing a 20-acre farm in Giroux, Manitoba. In February 1975, Sanchez returned to the United States under President Gerald Ford’s amnesty program. Ann stayed in Canada, and Joseph traveled back and forth until she joined him in Arizona in 1978.

In 1981, Joseph and Ann had a daughter, Rosa Nadine Xochimilco, and they lived in Scottsdale, Arizona, where Joseph maintained a studio on Cattletrack Road. During the 1980s, Sánchez developed a program as an artist in residence at Rosa’s schools, teaching college level art history and technique to elementary school students. More than half of those students have gone on to become professional artists.

Sánchez travelled for his work, and in 1990 began traveling to Santa Fe, New Mexico where he met Margaret Burke. In 1996 he made his Santa Fe residence permanent, and they had a son, Jerome Bonafacio Xocotl. Joseph and Margaret were married in 2006.